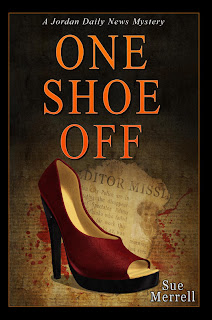 My purse fell over in the passenger seat spilling its contents on the car’s floor. Gathering up the pieces I spotted my favorite earring.  Its mate had gone missing several months ago. What good is one earring? I should just throw it out but it was a favorite. I threw it back in the purse with all the other stuff.
Half a pair of anything is one of life’s great frustrations. Who hasn’t done a load of laundry and discovered at least one unmatched sock? You stick it in the corner of the sock drawer assuming the mate will show up and sometimes it never does.You end up with four or five lonesome rejects in the drawer. Where do all the mates go?
Early in my newspaper career I wrote a column for single people. The promotional photo featured a group of unmatched shoes. Nothing expresses unrealized potential like half a pair.
One Shoe Off is the second book in the Jordan Daily News mystery series, The title refers to a clue that a kidnapped editor left behind. But as the story develops it becomes a metaphor for a world off balance where the guilty prosper and the innocent are punished.”One shoe off, one shoe on, diddle, diddle dumpling….”
The day after my purse spilled its contents I was straightening my bedroom when once again I spied that beloved lone earring in the jewelry box. Wait a minute!
I ran down the hall…literally ran to the kitchen. I grabbed my purse, fished through the jumble and pulled out my earring. I ran back down the hall to the bedroom, grabbed the earring in the jewelry box and held the two up side by side. It was a Biblical  moment. Call the neighbors and rejoice. That which was lost has been found.