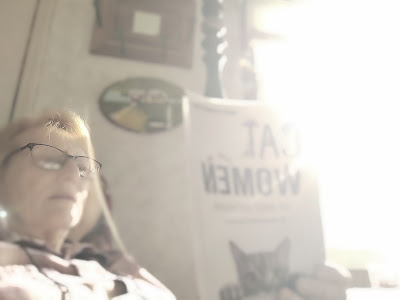 I spent my afternoon lying in the sun reading a good book…my ideal Saturday. Oh, sure, I was lying in a recliner in my living room in front of a sunny window. And I was wearing a flannel shirt not a swimsuit. I mean it was only 26 degrees outside.

But the sun did its job. It warmed the room and lifted my spirits. I even drank a glass of iced tea.   That’s what you do in Michigan. You make the best of what you have.

In some ways that describes the book I was reading, Cat Women of West Michigan:The Secret World of Cat Rescue.  Here we have an apparently insurmountable problem, an over population of stray cats so bad that 5,547 were euthanized in Kent County in 2006. But the ladies that love cats in this county didn’t throw a temper tantrum or shrug and say that’s just the way it is.

Some became vets to offer low-cost spay and neuter clinics. Some organized transportation networks  to help people to get to the low-cost clinics. Some put  together groups to trap-neuter-and return stray cats. Some turned their garages in to cat rescues. One even opened a cafe where people can choose a  cat to adopt in a comfy, homey atmosphere.

So if you are looking for a way to brighten up a winter afternoon, let me suggest a sunny window and Janet Vormittag’s latest book, Cat Women of West Michigan. Janet has written two humorous, heartwarming books about “You Might Be a Crazy Cat Lady if…” but the ladies in the latest book are not crazy. Determined. Driven. Daring…and getting the job done.

The Stone Diaries by Carol Shields
My rating: 1 of 5 stars

My respect for the Pulitzer Prize has dropped a notch, because this 1995 winner is one of the dullest, slowest books I have ever read. Theoretically it is the story of Daisy Goodwill, since it opens with her birth and closes with her death. But you get to the end and don’t really know her at all.

The story opens with Daisy’s mother-to-be cooking alone in the kitchen. She is overweight and apparently doesn’t know she is pregnant when she starts having labor pains. The reader senses that tragedy is about to happen but instead the story detours outside to a neighbor hanging up laundry. This would be fine if the neighbor heard screams from the kitchen and quickly comes to the rescue. But no. the story dawdles with the neighbor’s internal monologue for a few pages. By the time the story returns to the kitchen the woman has died and the neighbor presents a baby girl to the unsuspecting father as he returns home from work.

This same sleight of hand continues throughout the book: an action scene is set up and then abandoned for some internal monologue by some barely related character and by the time the story returns to Daisy’s story the action is over and reported second hand.

I actually thought we might be getting to Daisy’s story when as young widow she takes a train trip back to Canada where she spent her childhood. She is going to visit the son of the neighbor who raised her. There’s a hint of romance coming and sparks fly as soon as she steps off the train. But no, we don’t get to read their conversation or see them fall in love. The story fast forwards to a wedding announcement and then suddenly she is a mother of three living the 1950s perfect housewife myth.

We have only vague hints of her discontent before her husband dies and Daisy takes over his gardening column. Although we sense this is her true calling, her real satisfaction, we only get hints of this from letters others write, not from Daisy herself. The book avoids ever showing her actually at work. All action is at arms length. An unmarried pregnant niece moves in and we get to see the niece remodeling a room, and then we hear, via correspondence from Daisy’s daughter at college, that Daisy wants the niece to keep the child. But we almost never hear from Daisy.

Finally, at the end of the book, when Daisy is an old woman, we get to read a real interaction. A minister confesses to her and she gives him good advice and for one brief moment we see this woman who has been the center of the whole book. Just a few sentences and oops, revealed too much, the window closes and Daisy feigns sleep so the minister will leave.

I detest internal monologues, I love action. Show, don’t tell. But over and over again this book allows other characters to tell what happens instead of just letting the reader see for themselves.

Britt-Marie Was Here by Fredrik Backman
My rating: 5 of 5 stars

I met Britt-Marie in another Fredrik Backman novel. I didn’t particularly like her in “My Grandmother asked me to tell you she’s sorry” because we mostly saw her fastidious busybody side, but there were a few hints of her big heart. It’s the heart that wins in this sequel. Britt-Marie has left her cheating husband and taken a job as caretaker of a soon-to-be-closed rec center in a dying town. Everything is crumbling around her so badly that she makes friends with a rat as her dinner companion. There are real threats like drugs and unsupervised children, but somehow Britt-Marie straightens it out the same way she rearranges messy silverware drawers. Ya gotta love her.

Blowback: A Thriller by James Patterson
My rating: 5 of 5 stars

James Patterson is the best and this is a lots-of-twists thriller with believable characters. An autocratic, rules-don’t-apply-to-me president has decided the enemies of America must be punished so he sets up his own CIA operations, foreign and domestic, without messy approval of congress or cabinet. He’s about to burst into World War III but since we all survive we know somebody, somehow stops this maniac. The details in his operations are amazing. The believability is part of what makes it so scary.

The Thursday Murder Club by Richard Osman
My rating: 4 of 5 stars

There are moments — comments from the retirement home heroes, or the interaction between the romantically attracted investigators — when this book is spot on. Too funny for words. But as a puzzle mystery this tale fails all the tests. There are plenty of twists and turns, just when you think it’s all resolved there’s another turn and then another. The ultimate culprits are least suspected, which is always good, but the motives are related to secrets that are not revealed until way too late. It’s as if the murders happened in another book and the reader only hears about it second hand. Mystery readers long for that ah ha moment when they realize the clue was right in front of them all along not when the writer pulls out back story in the final scene that was never hinted at before. And the humor is Sooo British like a confession during a chess match when both players are more interested in the game moves than reacting to life and death revelations.

Wishful Sinful by Tracy Dunham
My rating: 3 of 5 stars

This murder mystery oozes Southern stereotypes faster than kudzu swallowing a white picket fence, but all the bourbon and honeysuckle have an addictive charm. The drunkard protagonist Tal Jefferson spends too much time overthinking everything. Her sassy assistant Jane makes up for it with punchy comebacks. The plot certainly has plenty of twists and turns. A Peyton Place of illicit relations is ratcheted up with boundless blackmail schemes, a big money real estate deal, and the shadow of a national military scandal from the past. The protagonist is a little slow figuring out the real killer, with her co-characters (and probably most readers) realizing she is misplacing her trust. But the story moves fast and is entertaining.

The King of Confidence: A Tale of Utopian Dreamers, Frontier Schemers, True Believers, False Prophets, and the Murder of an American Monarch by Miles Harvey
My rating: 5 of 5 stars

As a writer myself, I admire the art of Miles Harvey as he tells the story of James Strang, Mormon prophet and self-proclaimed King of Heaven and Earth. A history professor, Harvey weaves Strang’s strange tale into the history of the time, such as Strang’s coronation on Michigan’s Beaver Island following soon after the well reported coronation of Queen Victoria. Or Strang publishing a history of the island the same year P.T. Barnum published his biography and later how Barnum’s bankruptcy seems to mirror Strang’s downfall. Every life is a part of the times in which they lived and that is so clear in this well-documented telling which includes many newspaper reports of the day, even from the paper in the town where I live in Michigan. But just as a person’s life reflects the times that they lived I couldn’t help hearing echoes of current false prophets and true believers in the words of Strang. When he exaggerates the size of his congregation it sounds so much like the reports of the “largest ever” 2016 presidential inauguration. Strang’s complaints about his mistreatment and the lies of his betrayers sounds awfully familiar too.

The Destructionists: The Twenty-Five Year Crack-Up of the Republican Party by Dana Milbank
My rating: 4 of 5 stars

From Newt Gingrich to Donald Trump columnist Milbank follows a well documented trail of Republicans repeatedly choosing winning at all costs, abandoning truth, honor and the American Way.
Unfortunately it’s not the party that has been destroyed, as the title implies. The party may well continue to win leaving the destruction of the country in its wake. I remember every event listed here, from the lies about Vince Foster’s suicide to Trump calling newspapers the Enemy of the People. I never really thought how the Gingrich name calling strategy and all the other lies worked together to create a party that celebrates liars like Trump. As Milbank points out, Trump doesn’t create the lies he simply tells people what they want to believe.

My Grandmother Asked Me to Tell You She’s Sorry by Fredrik Backman
My rating: 4 of 5 stars

Loved Backman’s previous novel “A Man Called Ove” and this has a lot of similarities. Both books are about the interactions of a community of people. This story is from the point of view of 7-year-old Elsa whose seemingly crazy grandmother dies leaving the girl with a series of letters to deliver. The recipients are characters in the fairy tales Grandma has been telling the girl but it turns out all the characters in the fantasy are people in the building where they live in Sweden. I found the fantasy too convoluted so I kept skipping chunks when the girl would try to relay the fantasy so perhaps I missed a little of the foreshadowing but I read enough to get the gist. The pace really picks up at the end with a lot of real danger and an unfortunate demise. Elsa is a tough talking kid, wise beyond her years. It’s impossible not to love her.

The Hot Kid by Elmore Leonard
My rating: 5 of 5 stars

Love Elmore Leonard. This is the first book in the Carl Webster series so I’ll need to find the rest. FBI agent Webster is the ultimate good guy who doesn’t want to take advantage of criminals. He always gives them a chance to surrender before he blows them away. Sort of a Dirty Harry of the Depression. And he has Sherlock Holmes power of observation and deduction. All the characters are so well drawn you can smell them and see the glint in their eyes.