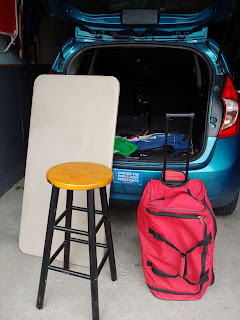 “Choose the path of most persistence.”
I’m not one to plaster political bumper stickers all over my car, but that one from the Elizabeth Warren campaign made it to my bumper. It’s not just because I support the candidate but I also identify with the sentiment.
I thought of that today as I unloaded a folding table, stool and giant book bag for a local author event at an area bookstore. Selling books is about as frustrating and time consuming as a political campaign. And it takes a lot of persistence. Authors need a double dose of ambition to stick to their guns and get that book written in the first place. But that’s just the beginning. Then you have to find the buyers. And that can be slow going.
So why do we do it? For that one reader who says my story was too scary to read alone at night. Or the one who said she could imagine it being a television series. Or that Italian reader who claimed my characters’ response to a serial killer was “so American.”
We write because these characters talk to us. The only way to silence the voices in my head is to write them down. As a mystery writer I HAVE to figure it out. How did the criminal do it? Why did he/she do it? And how will my protagonist solve it?
We write because we chose the path of most persistence. As Robert Frost would say, “that has made all the difference.”