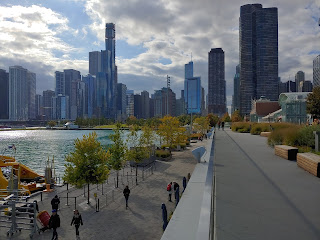 If you are getting tired of all the anger on Facebook, Twitter and the nightly news, turn it off and go on a trip.
It doesn’t really matter where you go, just some place different where you’re surrounded by people you don’t know. Strangers. I took a day trip on an Amtrak train from Grand Rapids to Chicago this week to enjoy a play at the Shakespeare Theater on Navy Pier. It’s a long and grueling day –18 hours from start to finish. Yet the trip reminded me over and over how nice and friendly strangers are.
I’m pretty familiar with the Windy City but I still need to consult a map now and then or read a street sign. Whenever I would do so, some friendly soul — unbidden — would smile and say “Where ya headed?” People are eager to be helpful.
“Oh, you can’t walk all the way to Navy Pier, ” said a woman on Michigan Avenue. “That must be five miles. You want to take a bus, right over there. Get the 124.”
She didn’t know how much the fare was since she uses a bus pass, but another guy overheard our conversation and interjected “It’s $2.50. Correct change.”
Helpful strangers don’t limit themselves to directions. They will show you how to work those complex train seats. Suggest a favorite place to eat. Even stop what they are doing to offer to take your picture when the selfie isn’t working out too well.
When we took the bus back to Union Station after the play, the stop wasn’t the part of the terminal we were expecting.
“Just take this walkway about two blocks,” said a commuter in a business suit rushing for the stairs.
Looking around the terminal I saw a cross section of America, every age, race and religion. There were a couple little boys chasing a pigeon. There was a large group of Amish in black, including a man with a beard so long and wild it looked like a cheap Halloween costume beard he had tied on. A dark-skinned man in a turban was quietly reading a book. A mother and daughter from Texas were struggling with half a dozen suitcases enroute to a wedding in Grand Haven.
No one was talking about Impeachment or Syria or Mar-a-Lago. I don’t know or care about each person’s political party or who they voted for in the last election. We’re just people, waiting our turn, helping each other if we can, smiling and sharing small talk.
No matter what social media says, this is the real America.