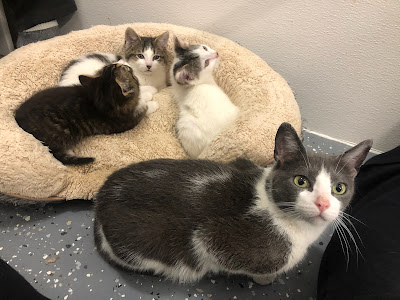 Laura was homeless when the labor pains started one snowy night last January.
She was less than a year old, barely more than a kitten herself. We like to believe that instinct taught her all she needed to know about motherhood but nature failed to fill her in on the facts of frostbite. Her little ears bear a permanent ragged edge.

The hungry mewing of her three little ones attracted the attention of a couple walking past the bushes outside their apartment building in Coldwater. They hurriedly tucked the cats inside their coats and offered temporary shelter in their home. In March they took the family to Country Cat Lady, a no-kill cat shelter specializing in rescuing mother cats and their litters. Since the non-profit organization opened in 2018, Country Cat Lady has rescued 162 cats and placed 118 in adoptive homes.
In one short year, Laura had already lived many lives: homeless, teen mom, rescue It was time for her to embark on her next life — foster cat.  That’s where I come into the story. I volunteered to foster Laura for a few months and try to help her get used to interacting with people. 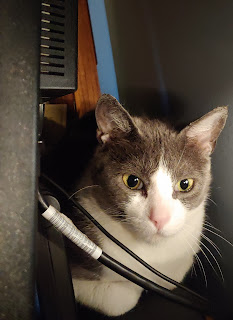 She hid behind a file cabinet in my home office for almost a month, refusing to even nibble her food if I was in the room. After about three weeks she decided to venture out to her food dish even when I lingered in the corner. When I held my hand out she gave it a sniff. Then she allowed a pet or two. And eventually I heard a purr.

I started leaving the door to the office open during the day, but Laura was too shy to venture out into the area where I was bustling about. Finally I left the door open at night and Laura went exploring. I awakened when I felt her walking on my bed but as soon as I stirred she disappeared. The next morning she was meowing in the bedroom doorway asking to be fed. It was the first time she had ever initiated communication. It was the beginning of her next life…Lady of the Manor.
Check back tomorrow for more Lives of Laura. I think this cat may have more than nine.